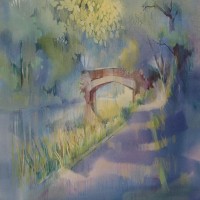 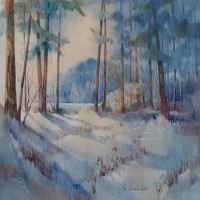 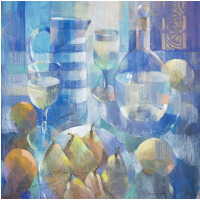 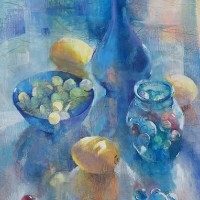 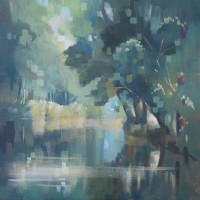 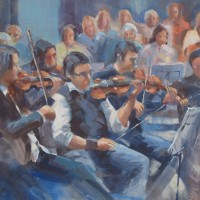 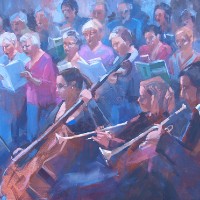 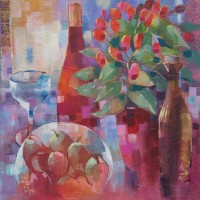 Born into an artistic and theatrical family in 1943, Liz has been painting and drawing all her life. She spent an unconventional childhood living in St. James’s Palace, where her father was a member of the Royal Household. After studying art to A level at school, she worked for four years at the Natural History Museum, where her duties included illustrating the publications and lectures of zoologists researching there. This was followed by several years of part time study at various colleges and with a number of eminent artists including Edward Wesson.

After qualifying as an Adult Education tutor in 1979, Liz followed a successful career teaching weekly classes in drawing, watercolours, and mixed media for Surrey, Berkshire and Hampshire County Councils from which she retired in 2003.

Liz now concentrates on a busy schedule, demonstrating to Art Societies throughout the country and teaching residential courses at Dedham Hall near Colchester, Essex, Earnley Concourse in Sussex, and other centres.

She has also contributed to several books including ‘The Artists’ Sketchbook’ and ‘Watercolour Plus’ and writes regular articles for ‘The Artist’ magazine. In addition, Liz is a well-known authority on artists’ materials and has demonstrated for most of the major manufacturers.

During a career spanning over thirty years, Liz has taken part in numerous exhibitions, both solo and with other artists, at galleries and other venues throughout the country. As a result, her work is held in many collections both public and private, at home and all over the world.

In London, she exhibits regularly at Mall Galleries with the Royal Institute of Painters in Watercolour and The Society of Women Artists to which she gained elected membership in 1993. In addition, she is a full member of the Society of Floral Painters with whom she exhibits twice a year. An active and committed member of many local Art Societies, she has recently been elected President of the Arun Art Society.

Liz has a widespread reputation for still life and floral and landscape paintings (many of which have been regularly reproduced as greetings cards and prints by major companies). Her main inspirations are light, colour and the heathland landscape around her home in Lightwater, Surrey.